Pilgrimage - The Seven Churches of Revelation

In the Book of Revelation, the last book of the New Testament we the read of the visions St. John had whilst in captivity on the island of Patmos.

In these visions he hears Jesus telling him to:

“Write on a scroll what you see and send it to the seven churches: to Ephesus,
and to Smyrna, and to Pergamos, and to Thyatira, and to Sardis, and to
Philadelphia, and to Laodicea.”

There is a common pattern to the letters although they differ in length according to the nature of each community. Christ addresses each church, identifying himself and describing the nature of the community. He then challenges or reproaches the church in question. He promises that everyone who conquers will be rewarded and appeals:

“He who has an ear. Let him hear what the Spirit says to the churches”

Arches into the Agora (market)

St Polycarp's in the courtyard of modern buildings

View of the Acropolis

The Tower at Pergamon

Prayer Tree on the acropolis

Remnants of the basilica walls

Remains of the columns

The massive columns now only half height

Massive wall construction with over arches

Restored altar and seating of synagogue

Basilica arches that once supported the massive walls

Laodicea with the Meander valley in background

The group meanders back

The western theatre - 2020 now under reconstruction

One of many infinity pools

The Justinian Cistern, Topkapi Palace, Church of St Saviour,
Sultan Mosque in Eyup and a cruise on the Bosphorus.

Church of St Saviour at Chora

Our guide Demir presents Richard and 'Tricia to

The Ecumenical Patriarchate of Constantinople 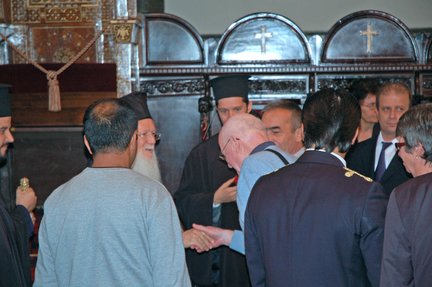 Eco friendly and only 1 horsepower