An Overview of the Church and Parish

The links above give a more detailed view

The Parish Church of St. Mary the Virgin stands above the High Street in Ecclesfield on the northern perimeter of the City of Sheffield. The Church is an ancient one and boasts many fine windows and architectural features.

Sometimes called the "Minster of the moors" - Not because of its size but because in times past the parish was vast being some 64 square miles in area and reaching almost to the Cheshire border. The Church is a Grade 1 listed building which has been updated and maintained in an aesthetically pleasing manner. Externally there is a fine graveyard, lytchgate and war memorial, the area around the Church is lightly shaded by mature trees and the local Village green complete with stocks sits close by.

Recent improvements include a new roof, sound system, hearing loop, additional internal rooms for meetings and activities, a toilet with disabled and baby changing facilities and a kitchen. The Church has a robed choir, an excellent pipe organ and a music group to support its regular Sunday services and festival services. St Mary’s is unusual in that it retains four churchwardens and its patron is now its own Parochial Church Council.

For a fuller history of the Church please click on the Church History button. 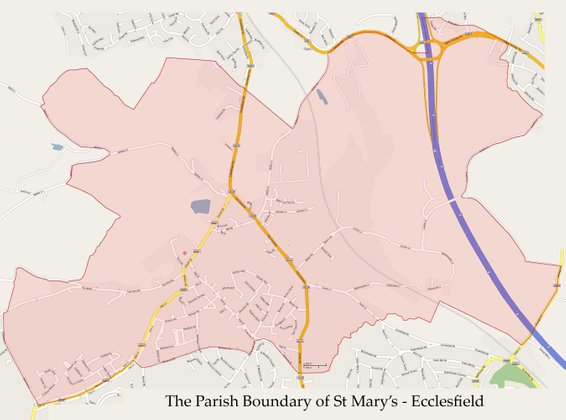 The Old Parish of Ecclesfield

It is a very extensive parish, the village of which lies due north of Sheffield, and although all the Nails manufactured in Hallamshire are made in this parish, and it produces both coal and iron stone, yet still the general character is rather that of an agricultural than a manufacturing district. From Hunter's Hallamshire.

Originally, Ecclesfield was the parish church for the parish of Hallamshire which included what is now the City of Sheffield. It was an extensive parish, one of the largest in England. William the Conqueror gave this parish to Roger de Busli, one of his captains, from whose posterity it passed through the families of De Lovetot, Vipont, Furnival, Nevil, Talbot, and lastly, to the noble family of Howard.

At the end of the eleventh century, a new building was erected by the de Lovetot family, Lords of Hallamshire, and gave it a monastic appropriation, to St Wandrilles in Normandy. The Priory and church became dissociated in 1310 and transferred to the Carthusian monks of St. Anne of Coventry. The church was extensively re-built in 1470 to 1500 and most of the visible building dates from this, with the main columns the oldest features dating back to 1200, possibly from the de Lovetot building. At the reformation, the patronage passed from the prior to the lords of the manor and the Duke of Norfolk.

"In the village of Ecclesfield, very soon after the conquest, a religious house was erected, dependant on the foreign monastery of St. Wandrille. It was under the superintendent of a Priory; but of its founders we are ignorant."

The Modern Parish of Ecclesfield

A village on the northern outskirts of Sheffield, now part of Sheffield City, with a population of 7,163. Set in open country and farmland, some manufacturing industry remains but many of the old companies, such as Newton Chambers, Greens Foundry and Brightside Foundry have closed as has all nail and file making activity.

Ecclesfield parish church remains, at the heart of Ecclesfield Deanery, part of the Diocese of Sheffield. The Deanery includes many parishes which were previously part of the old Ecclesfield parish:- Bolsterstone, Bradfield, Brightside,Chapeltown, Deepcar, Pitsmoor, Grenoside, Mortomley, Oughtibridge, Norwood, Parson Cross, Southey, Fir Vale, Shiregreen and Stocksbridge. The church remains an extremely impressive building, still worthy of it's seventeenth century description "Minster of the moors". It is unusually large for a village church, and is Grade 1 listed.

Other unusual features include the patronage, which is now with the church's own Parochial Church Council, and the existence of four church wardens. As a link to the huge parish of the past, the vicar remains patron of both Bradfield (which is a rectory) and Grenoside Churches. The building has been sympathetically improved with a new roof and internal rooms including a toilet and kitchen. The church retains a robed choir and a fine pipe organ with three services every Sunday plus daily morning prayer.

These form part of the Penistone and Stocksbridge parliamentary constituency.