Joseph Hunter was a Unitarian Minister and antiquarian best known for his publications  - ‘Hallamshire’, ‘The History and Topography of the Parish of Sheffield in the County of York’ and the two-volume ‘South Yorkshire (a history of the Deanery of Doncaster)’, still considered among the best works written on the history of Sheffield and South Yorkshire. 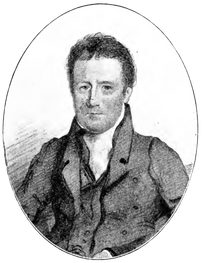 Hunter was born in Sheffield on 6 February 1783 to cutler Michael Hunter (1759–1831) and Elizabeth Girdler (1761–1787). Like his father he was by trade a Cutler and the family lived in a house on the north side of New Church Street an area now occupied by the Town Hall.

Educated at Attercliffe, he later studied theology at New College in York, becoming a Unitarian Minister in Bath in 1809. He never again lived in Sheffield or South Yorkshire though he often returned to the County in the course of his researches.

His early interest in antiquarian studies covered a wide field and this interest became his professional career when, in 1833, he was appointed a sub-commissioner of the Records Commission and moved to London.

In 1838 he became an Assistant Keeper of the Public Records and is particularly remembered for his work in classifying the Exchequer records. He was Vice-President of the Society of Antiquaries.

He died in 1861 and is buried at St Mary’s - Ecclesfield Parish Church in the city of Sheffield. 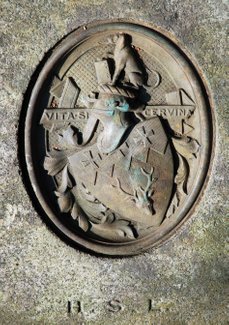 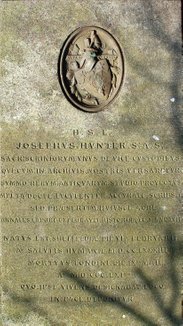 After his death a large number of his Manuscripts became the property of the British Museum. Without a doubt the most important of these is Add. MS. 24,458, which he entitled ' Familiae Minorum Gentium' - a volume of some 650 pages completely filled with pedigrees, chiefly of Yorkshire, Derbyshire, Cheshire, and Lancashire families, though of course their branches extend over other counties.

The Hunter Archaeological Society, which was formed in 1912 "to study and report on the archaeology, history and architecture of South Yorkshire and North Derbyshire", was named in his honour.

Hallamshire. The History and Topography of the Parish of Sheffield in the County of York, (1819)

South Yorkshire (a history of the Deanery of Doncaster), Volume I, (1828)

South Yorkshire (a history of the Deanery of Doncaster), Volume II, (1831)

transcribed and published in 1894-6 by The Harleian Society

The Diary of Ralph Thoresby, F.R.S