Reverend Dr. Alexander John Scott was a chaplain who served in the Royal Navy during the French Revolutionary and Napoleonic Wars. He also served as Horatio Nelson's personal chaplain at the Battle of Trafalgar, and had previously served as his private secretary. Scott was a close friend of Horatio Nelson, and was with him as he died aboard HMS Victory. 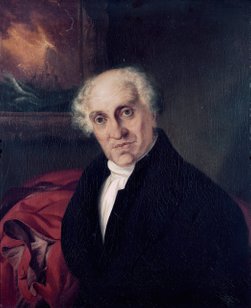 Scott was born the son of a lieutenant in the navy and was educated at Charterhouse. After gaining a scholarship, he attended St John's College, Cambridge, graduating from there in 1792. During his education he had become fluent in French, Spanish and Italian.

He was ordained in 1793 and joined the navy that year as a chaplain. Initially he was assigned to HMS Berwick, a ship of the line and part of the Mediterranean fleet under Admiral Samuel Hood, who later gave his name to the famous warship HMS Hood.

Scott first met Nelson while in the Mediterranean. Nelson was by this time captain of the 64-gun HMS Agamemnon. Scott was offered the position of Nelson's chaplain, but declined it, instead moving aboard the 98-gun HMS St George, followed by the 100-gun HMS Britannia, then under Sir Hyde Parker. He was present at Nelson's victory at the Battle of Copenhagen in 1801, this time aboard the 98-gun HMS London. After the battle was over, Scott helped to draw up the treaties subsequently presented to the Danish, and accompanied Nelson's party as an interpreter. After Parker's recall, Nelson asked for Scott to join him, but Scott could not bear to leave Parker and returned to England with him while Nelson remained in the Baltic.

Scott was then assigned to the frigate HMS Topaze which was sent to the West Indies, serving with Admiral John Thomas Duckworth. Duckworth used Scott's linguistic abilities to help in translating documents and to spy and eavesdrop whilst visiting foreign ports. On one occasion he brought Scott to dine with him and the French general Charles Leclerc, in order to try to ascertain the French intentions towards the Caribbean. In 1803, whilst aboard the Topaze, Scott was the victim of an accident that left him severely shaken. He was struck by lightning while sleeping in his cabin, the bolt also igniting some powder and cartridges that were stored above him. The explosion and electric shock knocked out several teeth, injured his jaw and affected his hearing and eyesight. He recovered, but was continually thereafter affected by his nerves.

Nelson arranged for Scott to be transferred to his flagship, HMS Victory, in 1804 as his foreign secretary. He had decided that Scott's gift for languages would make him a desirable addition to his staff. Also aboard the Victory was another man named Scott, this was John Scott, Nelson's personal secretary. Nelson solved the problem by terming Alexander Scott, now installed as his chaplain, as 'Doctor Scott'. Scott was not actually a Doctor at this point, the award of the Doctorate of Divinity from the University of Cambridge came after Trafalgar. Scott often spent his time aboard Victory reading newspapers and letters captured from foreign prizes to Nelson.

The Battle of Trafalgar

Scott initially went below at the start of the battle to be with the wounded as they were brought to the cockpit. He soon became overwhelmed with the sights and sounds, and began to head up to the deck for fresh air. On the way he passed a figure being carried below to the surgeon, and learnt that it was Nelson. He remained with Nelson during his last hours, supporting him and rubbing his chest. After Nelson had died and the surgeon, William Beatty was summoned, Scott was found to be still rubbing the chest. He accompanied the body back to England, was with Nelson during the lying in state at Greenwich Hospital and attended the funeral processions and the ceremony in St Paul's Cathedral. He later wrote of his friend:

Men are not always themselves and put on their behaviour with their clothes, but if you live with a man on board ship for years, if you are continually with him in his cabin, your mind will soon find out how to appreciate him. I could forever tell of the qualities of this beloved man, Horatio Nelson. I have not shed a tear before the 21st October, and since whenever I am alone, I am quite like a child.

Nelson had hoped that if he were to die, that George Rose, then Vice-President of the Board of Trade, would help Scott with money. He also wished for his brother William Nelson to surrender his prebendal stall at Canterbury Cathedral to Scott, when William Nelson inherited. William however declined to do so. 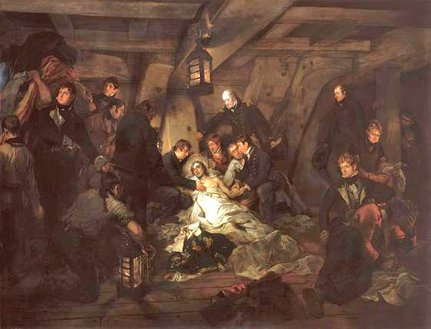 Nelsons death at the Battle of Trafalgar

Scott lived a peaceful life after the battle. In 1807 at the age of 35 Scott married the 17 year old Mary Frances Ryder. The newly-weds moved into the vicarage at Burnham on Crouch where Scott assumed the curacy to supplement his income as Rector of nearby Southminster. Alexander and Mary had a son who died shortly after birth and two daughters, Horatia and Margaret. Mary died in 1811 having been weakened by the birth of her son. Scott's daughter Margaret became a best selling author under her married name of Margaret Gatty. Scott also became Chaplain to the Prince Regent in 1816 and then the incumbent of a government living at Catterick. He died at Ecclesfield at the age of 72 on the 24th July 1840 and is buried in a grave along with other members of the Gatty family. The grave is positioned to the rear of St Mary’s and adjacent to the old vicarage path. 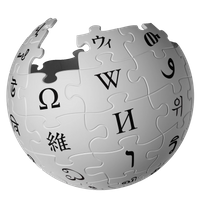