Situated alongside the south wall of St. Catherine’s Chapel, in the south east corner of Ecclesfield Church, is by far the most magnificent memorial in the building, to the memory of another Scott, Sir Richard Scott. Richard, son of Thomas Scott and Isabel Alcock, was born at Barnes Hall which had been built as long ago as 1327 and had been the Scott family home since 1447 when an ancestor, Thomas Scott (who chose to use the name Rotherham) purchased it. Rotherham served as Archbishop of York and Lord Chancellor in the 15th century. Richard Scott is difficult to research as there is little on record or on the internet and only sketchy information via the Fitzwilliam Wentworth Trust and the Wentworth Woodhouse Trust, so an enigmatic person but one who was clearly seriously respected and loved. We know he was Comptroller of the household of Thomas Wentworth[1] and was his Privy Counsellor and deputy in Ireland. Scott lived at Barnes Hall, Ecclesfield, but died in Ireland. He was married but only had a stepdaughter, Catherine Norcliffe, to whom he left his possessions. 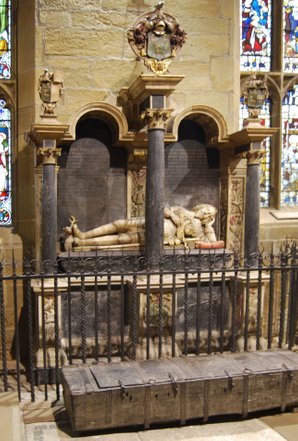 In his work for the Wentworth family, Richard Scott spent a considerable time abroad, especially in in Ireland where the Wentworth family owned a significant amount of land and Thomas Wentworth was Lord Deputy for 8 years.  Scott sat as an Irish MP for Boyle in County Roscommon. He was knighted in 1635 and left a legacy to Trinity College, Dublin, in 1637. In the reign of Charles 1, politics in England, Scotland and Ireland were brutal and it is believed he was killed during fighting in Ireland in 1638, 3 years before Thomas Wentworth was executed on Tower Hill.

The memorial, by William Wright,[2] was erected in 1639 following the death of Scott in 1638 in Ireland where he is buried. Most of the memorial was made in London and then transported to Ecclesfield by sea and with horse drawn carts. Constructed of marble, with some granite and with iron railings believed to have been made locally, the memorial represents Scott in armour, recumbent and with his head resting on his left hand. The iron grill is original, and the monument was restored in 1749 by John Watts who lived at Scott’s old home, Barnes Hall. Other minor restorations have been carried out. The memorial is quite exquisite but is again in need of a more general restoration to reveal its true splendour. 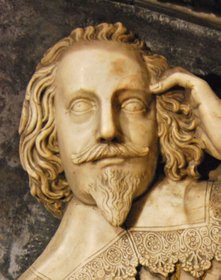 I shall add the inscription from the monument of Sir Richard Scott, which was repaired in

1749 by John Watts of Barnes-hall esquire.

The inscription is in Latin and a loose translation reads:

To the memory of Richard Scott, born in Yorkshire with Scottish ancestors, a man of merit and the order of knights. From the family of Thomas Scott, Archbishop of York whose legacy includes Jesus College Rotherham and the College of Lincoln in Oxford.

Worthy to be from such stock, Richard Scott was a man of piety towards God and of integrity towards humans. The most outstanding of which has been to the poor and it is to be marvelled at his friendliness to society, his friendship and faith observed in action, and generosity. A man who was so popular.

He primarily was devoted to the study and work of the same mind, having traversed the country and overseas and returned from Spain having demonstrated firmness to his religion in the face of inquiries. He then lived his life in happiness in Ireland although often away from those dear to him.

His unforeseen death occurred in Ireland while loyally serving Thomas Wentworth, Earl of Strafford, other famous men, & the next king.

In his memory, following his death and according to his will, his patricians have gladly erected this monument for posterity. He leaves his stepdaughter, Catherine Norcliffe, and her sons to take his place.

With thanks to Dr. Andrew Somerville, Trinity College, Dublin

[1] Thomas Wentworth, 1st Earl of Strafford (13 April 1593 (O.S.) – 12 May 1641) was an English statesman and a major figure in the period leading up to the English Civil War. He lived at Wentworth Woodhouse in South Yorkshire and he served in Parliament and was a supporter of King Charles I. From 1632 to 1639 he instituted a harsh rule as Lord Deputy of Ireland. Recalled to England, he became a leading advisor to the king, attempting to strengthen the royal position against Parliament. When Parliament condemned him to death, Charles signed the death warrant and Wentworth was executed.