The history behind St Mary’s Choir

We have had a Choir in Ecclesfield Church for a few hundred years but the exact date when it was first formed is not known. We do know however that we have had a robed and surpliced choir for at least 136 years.

In his book ‘A Life at One Living’; (1) Dr Gatty states “Prior to 1826 the choir with both stringed and reed instruments, flute, bassoon, violin were seated in the West Gallery. The Choir-men with a female voice or two, and no boys, sang florid music in an oratorio style; the method was not cultivated nor ecclesiastical, but showed native ability”. After that date the singers occupied a singing loft in front of the newly purchased organ which cost £400.

It was not an easy matter after forty six years  to change this custom but in 1872 a Choirmaster was engaged who introduced a more cathedral like service which led to the vesting of a choir of thirty men and boys with surplices.

Dr Gatty had no hesitation in saying ”That the service in Gods house was more reverently performed than it had ever been before; that this plain symbol of the “robe of righteousness” acts upon those who wear it with sobering, may I say, sanctifying effect”. ‘This tradition of only having robed male voices in the choir was to last almost one hundred years.’

Sadly there is little documentary evidence covering the period 1903 to 1966 so much of this period remains a mystery.

It is not clear for how long a Cathedral like Choir was engaged but it appears that this tradition was to continue for many years. The information that we have indicates that an all male voice choir was still being used the in the nineteen thirties, forties and fifties.  A Mr. Whitehead was the organist from 1945 up until 1957 when Harold Fulleylove was appointed, Harold was a music teacher and he was organist and choirmaster. During the period from the early 1950s to 1966, the  assistant  organist was Miss Ada Gillott, another local music teacher, who also sang with the choir. At some point a mixed voice choir was started prior to 1966 but again how many years before we do know.

The Vicar in 1966 the Rev Richard Page decided that he would like the Choir to be re- formed into one consisting of only male voices and would therefore continue with the tradition of having a Cathedral like Choir. Mr Peter Crowther who was one of the best organists in this area was appointed Master of the Music in 1966. As musical representative for the Diocese of Sheffield and Master in Charge of the Royal School of Church Music Courses, Mr Crowther developed and instilled the principles of the R.S.C.M. Choristers attended instructional and residential courses in different parts of the country including those at St Paul’s and Truro Cathedrals.

Choir in this area. It now consisted of about thirty boys and fifteen men. There was a well established regime of training, examinations and promotions, through from probationer, junior singing boy, and senior singing boy to chorister. In 1971 the choirboys were examined by a Special Commission of the RCSM and were admitted as a Guild Choir – In an age when congregational participation was the vogue in many churches, the choir of Ecclesfield, particularly during the monthly Choral Evensong, continued to sing music derived from all periods from the 16th century up to the present day and normally associated with our Cathedrals.

In 1977 Mr Peter Crowther decided to move on and after a short period was appointed Master of the Choir at Sheffield Cathedral, many of the men and boys also decided to leave and with it came the end of a Cathedral type Choir in Ecclesfield. The Church at this time had many young families so the tradition of having a choir of only men and boys was relaxed which left it open for women and girls to join.

Between 1977 and 1987 we have had several Organists and Choir Masters; Richard Salt, Nicholas Hill, Geoff Cassidy, Colin Parsons, Hubert Stafford, John Taylor and one Choir Mistress Valerie Robinson. The choir grew in number and at one stage there were between forty and fifty men women boys and girls. Unfortunately over a short period of time the boys and girls left the choir for various reasons until we were only left with an adult choir.

In 1987 the Rev Dr David James appointed Don Knott as Organist and Master of the Choir. His wife Madge, a trained music teacher, came with him as Choir Mistress. Madge was like a breath of fresh air for a choir like ours as most members did not read music. Over the next twenty years both Madge and Don encouraged us to keep trying, even when we thought that the parts we were being taught to sing were too difficult. Due to their commitment, dedication, confidence and their patience they formed a choir of men and women capable of singing Easter Cantatas (The Crucifixion, The Darkest Hour, Olivet to Calvary, The Saviour } and most chorus’s from The Messiah. Concerts were given which included music from many West End shows and also a variety of other secular music. The Choir also sing at approximately twenty Weddings a year.

The Christmas Eve Service was changed from the traditional Midnight Service to an earlier time and with the Church full to capacity the Choir, who sing some solo parts and the congregation, we sing Christmas Carols with lessons, telling the Christmas story. Sadly, Madge died unexpectedly two weeks before Christmas in 2007. The Choir continued working and singing with Don, one of the best organists in this area, until his retirement in 2019. Lynda Pearce, one of our members has agreed to conduct the choir on special occasions, we pray that we shall be able to continue to praise God in our ministry of music in such a way that it would make Madge proud of us.

We are one of only a few robed choirs in the north of Sheffield and we are always looking for new members. If you can sing, enjoy music and would like to help lead the Sunday Morning Services, or you are willing to help us sing on special occasions, then please get in touch. I am sure you will enjoy singing with us, we are a friendly bunch.

1 - Dr Alfred Gatty’s book ‘A Life at One Living’ was first published in September 1884 and it contains a brief history of Ecclesfield Church.  Available from Amazon as part of their curated historical reproduction series

Choir Image Gallery
Where possible names and dates have been included as footnotes to the images.
Click on images to open full size 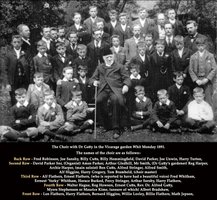 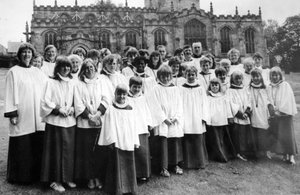 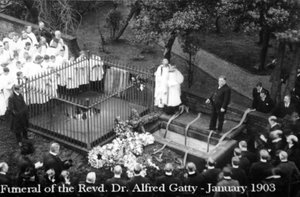 Robed Male Choir at the funeral of Dr Gatty. 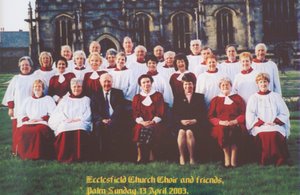 Ecclesfield Choir and Friends in front of Church Palm Sunday 2003. 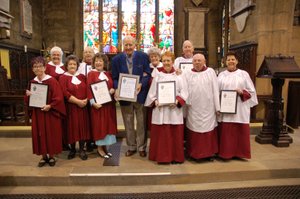 Don with the choir celebrating 30-years of service - 2018 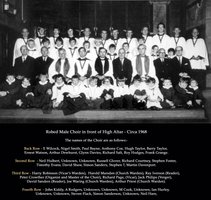 Robed Male Choir in front of 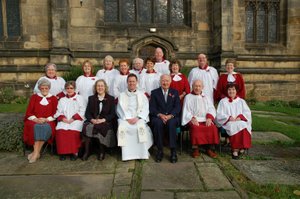