Ecclesfield Church is a registered Charitable Trust No 1144309.

Organisation – The Church of England

The Church of England is organised into two provinces; each led by an Archbishop (Canterbury for the Southern Province and York for the Northern). These two provinces cover England, the Isle of Man, the Channel Islands, the Isles of Scilly and even a small part of Wales. Each province is built from Dioceses. There are 43 in England and the Diocese in Europe has clergy and congregations in the rest of Europe, Morocco, Turkey and the Asian countries of the former Soviet Union 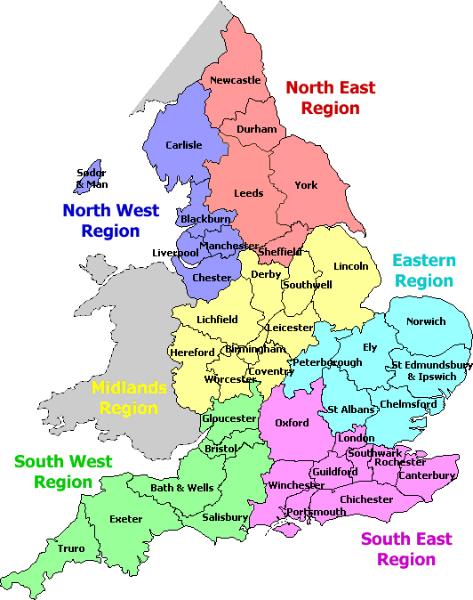 Her Majesty the Queen is the Supreme Governor of the Church of England, and she also has a unique and special relationship with the Church of Scotland, which is a Free Church. In the Church of England she appoints archbishops, bishops and deans of cathedrals on the advice of the Prime Minister. The two archbishops and 24 senior bishops sit in the House of Lords, making a major contribution to Parliament's work.The Church of England has 108 bishops and is governed by a Council known as a Synod. The General Synod is elected from the laity and clergy of each diocese and meets in London or York at least twice annually to consider legislation for the good of the Church.The Archbishops' Council was established in 1999 to co-ordinate, promote, aid and further the mission of the Church of England. It is composed of 19 members and 7 directors whose task is to give a clear sense of direction to the Church nationally and support the Church locally. 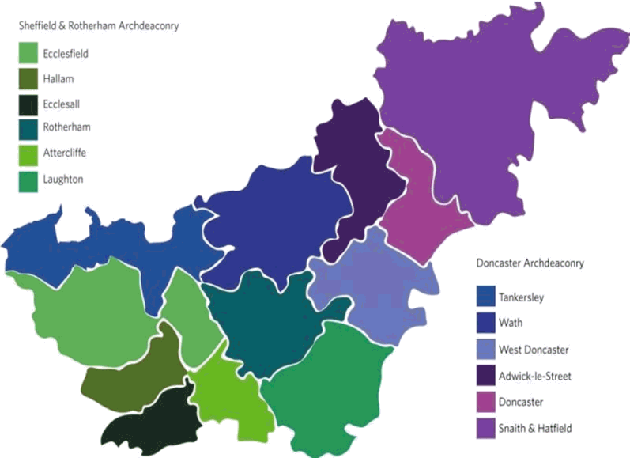 Sheffield Diocese was created in 1914, before that Sheffield was part of the Diocese of York. The Diocese (like all others except Europe) is divided into parishes. Like the Diocesan Synod which includes Bishops, clergy and elected lay-people. The parish is the heart of the Church of England. Each parish is overseen by a parish priest (usually called a vicar or rector) although a vicar or rector may be responsible for more than one Parish. From ancient times through to today, they and their Bishop are responsible for the 'cure of souls' in the parish. This means that the vicar is responsible for caring for everyone in the parish, not just church members and this technically includes people of other religions or none.  And this explains why parish priests are so involved with the key issues and problems affecting the whole community. In some Dioceses, such as Sheffield, parishes are grouped into a body which is smaller than the whole Diocese, known as a Deanery. The Deanery also has a Council known as a Synod – the Deanery Synod which includes clergy and lay people. Ecclesfield is in the Deanery named after itself which is made up of a total of 19 parishes.

The vicar is the spiritual leader of the church and is supported by a range of people all of whom have roles and responsibilities in ensuring that the church is managed and thrives. The church is run by a committee called the Parochial Church Council (PCC) which meets on a monthly basis.

PCC
The PCC (Parochial Church Council) is the group responsible for managing all aspects of the church. It consists of the Vicar and any other permanent clergy, the Churchwardens (1), delegates to Deanery and Diocesan Committees plus 9 members elected by the church (1). The PCC meets on a monthly basis.

There are four main sub-committees or teams reporting to the PCC at St. Mary’s:

These teams make recommendations to the main PCC meeting as appropriate.

Back in the 1950s, approximately 85% of C of E income came from investments and 15% from parish giving. To-day, because of inflation and the provision of pensions for clergy – which did not exist in the past – 85% of all income is raised from collections at services and fees from weddings and funerals and only 15% from investment. Although the Church of England is a large landowner, much of the land, such as Ecclesfield churchyard, cannot be sold or used for another purpose.

Expenditure
The annual cost of running the church in Ecclesfield is £95,000. This includes maintenance of the building, heating, lighting, insurance and security system plus a full-time vicar. A gift of around £60,000 is made by Ecclesfield church each year to the Diocese of Sheffield towards the cost of the vicar’s housing, Council Tax, Pension and his stipend (salary), and to support other churches within the Diocese. We do take advantage of Gift Aid which boosts the giving from people who pay tax and we can reclaim VAT for certain types of expenditure.

Income
Our income comes entirely from gifts from visitors and people who attend church services plus there is a total income of around £15,000 each year from the fees for weddings and funerals. Most years it is a struggle to balance the books!

Contrary to the popular held belief, there is no income from the Government or the national Church of England or Sheffield City Council or Ecclesfield Parish Council to provide the services or maintain and run the building.

The Building and Fabric

As can be seen on other parts of the website, Ecclesfield Church building is an ancient one, much of it 500 years old with some parts more than 800 years old. The building is Grade 1 listed and no work other than minor maintenance and repairs can be done without legal permission and reference to Historic England through the Faculty process. There is always work to be done and it is probably true to say that, if we had the money it would be
possible to spend literally millions of pounds on restoration and improvement.

Fortunately, the building is in reasonable condition for its age and routine maintenance is fairly low. Because the income we generate is not sufficient to provide for anything other than minor routine maintenance, all major projects have to be funded by special fundraising appeals or through the donations of generous benefactors. We have also been fortunate in receiving grants from English Heritage through the Heritage Lottery Fund in the past.

It is not possible to fund major projects on the church building from normal income, so these require fundraising and grants. A building of this age regularly needs maintenance and improvements which have to be carried out carefully and meet the heritage rules for a Grade 1 building which makes them especially costly.

This work was carried out in 2003 at a total cost of £78k + VAT. The funds were raised as part of the Ecclesfield Millennium Appeal which raised a total of £140k. This included a grant of £30k from the Heritage Lottery Fund. Funds raised included the funding of substantial improvements to the Gatty Hall.

Restoration of the West Window
The inside and outside of the West window was restored in 2008 at the cost of £14k + VAT. The cost was met with a gift from the Jeffcock family.

New Bells
The tradition of bells at St. Mary’s dates back to the 16th century. By the year 2000, the existing 8 bells were in need of some major renovations. A decision was taken to try and enhance the peal to 10 bells if the funds could be raised. The project was carried out in 2011 and included replacing the belfry louvres at a total cost of £80k, nearly all of which was raised through fundraising, grants and generous donations. Link to Bell Ringers Page

New Boilers
The boiler and control system were replaced is 2013 at a cost of £14k + VAT. The cost was met by accumulated income from the church tea rooms.

New Roofs on the Nave and Nave Aisles 2018
An architect’s inspection in 2015 indicated that the covering metal and some of the woodwork on the main Nave roof and the Nave side aisles were all in need of urgent repair or replacement. This work was carried out in 2018 and work included new security systems on the roof and inside the building. The total cost was £220k + VAT and this was mainly funded by a grant from the Heritage Lottery Fund covering three quarters of the work and a grant from Ecclesfield Feoffees covering the remainder.

Permanent Level Access (Completion 2021)
This project is in the final build stages. The estimated costs are currently £80k + architect’s fees + VAT. A grant from Ecclesfield Feoffees has already been given and more than half of the cost has been raised through gifts and donations, grant applications and general fundraising.

Church and the Environment

Looking after a medieval building and trying to be environmentally friendly is not easy. We cannot install cavity wall insulation or double glazing but are making every reasonable effort to conserve energy and re-cycle. At St Mary's - Ecclesfield, we meet this challenge in the following ways:

Lighting
The interior lighting was replaced in 2003 with high efficiency metal halide units. The whole of the inside of the building, including the offices, takes 6 Kilowatts to light – some 50% less than the previous scheme. The external floodlighting and all external lighting is LED using a total of only 300 watts – equivalent to a single domestic halogen floodlight!The Clock and Clock Tower are lit separately and paid for by Sheffield City Council as it is a public clock.

Heating
Ecclesfield Church is a challenging building to heat. The main roofs in the Nave were replaced in 2018 and this has included improved insulation in an attempt to reduce the heat loss. A pair of commercial Bosch Worcester high efficiency gas boilers was installed in 2013. A computer controller programmer/control system which senses the outside and inside air temperatures and rate of changes in them, keeps the internal temperature above a minimum setting and heats the various zones in the building, if necessary anticipating when a zone needs to be warm and coming on early.

Paper
All paper printed for use in services is re-cycled using the Sheffield Blue Box scheme. Our website also helps to protect the environment because all the pictures and documents can be viewed on-line without printing.

Facilities for the Disabled
We want the church building to be accessible to all. We have a disabled toilet, a hearing loop on the sound system, two wheelchairs inside and level access via the west door.

Security and Alarm Systems
We are sadly in an age where there is no more respect for a place of worship than for any other property and it has become impossible to leave the building open all the time without someone to guard the fabric and fittings. Thefts of metal from the roof have also resulted in the need for extremely sophisticated alarm systems.

The systems protecting Ecclesfield include: -

For a period of over 10 years, the church provided a Tea Room in Court House Antiques.  Staffed by volunteers, this was a way of reaching out to the community of Ecclesfield and visitors from other places and also a means of raising valuable funds to help pay for maintenance and improvements to the church building. The Tea Room became well known for its fresh tea and coffee and some marvellous cakes. Court House Antiques closed in 2006 but the tradition is carried on with tea, coffee and refreshments served in the church building on Tuesday and Friday mornings.

The Gatty Hall was originally part of the church but in the early 1970s, a Charitable Trust was set up to run and administer the hall for the benefit and use of the local community. Church members are still involved in the running of the Gatty Hall but the hall is self-funding and self-managed with major projects paid for by fund-raising and by grants from local bodies. Link to Gatty Hall Page